E4 | An Honest Mistake And A Wow Experience 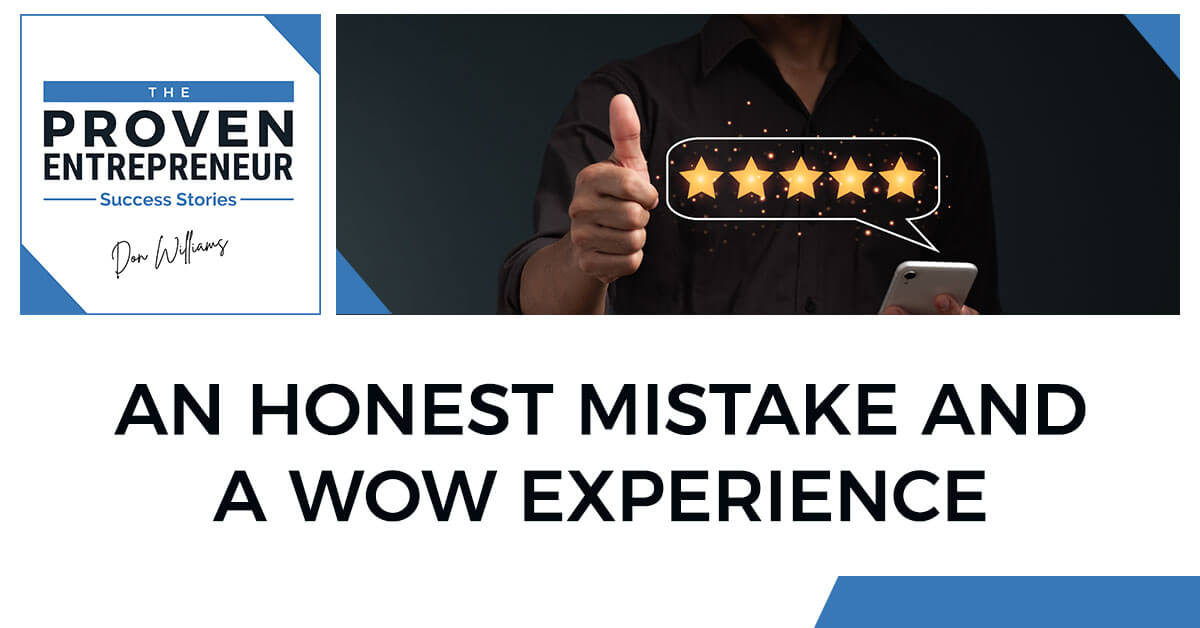 In business, it’s when a company delivers experiences to prospects, customers, teammates, vendors, partners, and even spouses and children to where they hear the word “Wow.” They are so blown away by how well the business or that person nailed that. Don Williams shares a “Wow” moment in this episode of Proven Entrepreneur.

For information on how to work with Don visit Work With Don Williams
You can also reach out to Don Williams at https://donwilliamsglobal.com
Please join Don and his businesses in support of St. Jude’s Children Research Hospital in its Mission to cure Childhood Cancers. You can donate to St. Jude at stjude.org/donate

Listen to the podcast here

An Honest Mistake And A Wow Experience

I’d like to talk a little bit more about the concept of wow. We know that wow is on the scale of 1 to 10, 10 being the best, that wow starts at 11 and goes on to infinity. It’s when a company delivers experiences to prospects, customers, teammates, vendors, partners, even to your spouse, children, etc., to where you hear the word, “Wow.” They are so blown away by how well you nailed that. This story is from 2002 and that’s important to realize because what wow does is when you deliver an experience to the level of wow people will never forget. They’ll remember forever.

The year is 2002, one of my companies is a contact center. That business makes and receives phone calls, answers chat, email, live text typically for Fortune 500 companies. In 2002, the Congress of the United States passed what’s known as Do Not Call. Anyone making outbound telephone calls to residences needed to scrub their call list against the Federal Do Not Call List. A lot of companies who did that used intermediaries service providers who would handle the scrubbing process. They were more prepared and also gave you a layer of insulation between the process.

Though my company did not need to register as a company to scrub, we didn’t need to register as a provider to companies who needed to scrub. The biggest difference was this back at that time to be the seller, the company that is legally required to scrub for Do Not Call, their expense was $8,500. My company, because we were a service provider to sellers, our expense was nothing because we were not the seller.

When you deliver an experience to the level of “wow,” people will never forget. Click To Tweet

As often happens in a business when you’re too busy, doing too many things, spinning too many plates as we registered for Do Not Call service with the service provider and I have no one to blame, but myself, I basically checked the wrong box on about a twenty-page form. The next month when my Corporate American Express bill came in, there was this $8,500 charge to the Federal Trade Commission of the United States.

I didn’t need to spend that money and so I reached out to the vendor. I said, “We made a mistake. My mistake, I checked the wrong box, but can you get me a refund? Can I reapply?” The vendor said, “It is a mistake, but it’s your mistake.” They were exactly right. I left that phone call thinking, “It’s not life-altering money, but it’s too much money to pay someone in error and let it go.”

I began placing phone calls to the FTC, Federal Trade Commission of the United States of America. The FTC, at least at that time, wasn’t very good about answering the phone. After I left a couple of messages and received no callback, I reached out to my card provider, American Express. As I was relaying, what had happened with the customer service rep at American Express, she replied to me and said, “Mr. Williams, don’t worry about it. We’ll reverse the charge and you’ll be good to go.”

I asked her, “You do understand that the merchant, in this case, is the FTC, the Federal Trade Commission of the United States of America?” Her response to me was, “Mr. Williams. It doesn’t matter. We always side on the side of the cardholder.” I thought that was an interesting exchange. When she told me that, I thought, “Wow, that’s unbelievable.”

A couple of days later, the front desk buzzes me in my office and says, “Don, we have the Federal Trade Commission on line one.” I get on the phone and talk with a very professional and courteous guy who recounts what happened. He said, “No problem. We’re going to issue a refund. You won’t have to have American Express to a chargeback.”

It all got resolved as it should and as was appropriate, but the point of that whole story is this. I had a problem and it was my problem. I couldn’t blame anybody. I made the mistake. If it was going to end poorly, it should be my responsibility to live up to my mistake, but my card services company, American Express, absolutely stood in front of me said, “We’ll help. It doesn’t matter whose problem or mistake it is.” Years later, I’m still telling that story because it still sticks in my mind when American Express delivered a wow experience to me.

For information on how to work with Don visit Work With Don Williams
You can also reach out to Don Williams at https://donwilliamsglobal.com
Please join Don and his businesses in support of St. Jude’s Children Research Hospital in its Mission to cure Childhood Cancers. You can donate to St. Jude at stjude.org/donate
Share this on:

S2:E13 | It’s Never Too Late To Start Your Business With Lisa Laporte 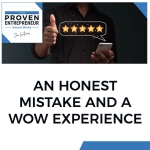 E4 | An Honest Mistake And A Wow Experience
The Proven Entrepreneur